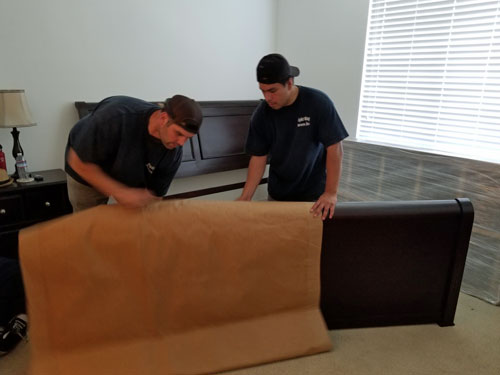 You want your belongings to arrive at your new home or business location safe and sound.  And professional movers like Rightway want happy customers.  But problems do sometimes arrive despite best efforts, from a few broken dishes to major water damage.

But federal and California law requires them to provide valuation options.  That’s more limited than actual insurance and specifies how much they will reimburse you for damage or losses.  And you can purchase insurance from “third parties,” often your current homeowner’s insurer.

You’ll probably want to keep small valuables such as jewelry with you.  The same goes for irreplaceable treasures such as photo albums.  But PCs, big-screen TVs, and fine furniture are another matter.  Before going into your protection options, here’s the most important thing to remember.  It’s critical that you identify valuable items to the mover, and declare high-value items in advance.  Otherwise, they’ll be treated as if they were ordinary household goods.

Released value “coverage” should be part of the basic moving estimate or quotation.  But the meaning of the term isn’t exactly obvious.  It’s simply the maximum amount the moving company will reimburse you for anything lost or damaged.  A bit surprisingly, it’s based on weight and not the particular item such as furniture or clothing or home electronics.  And it’s a low $0.60 per pound (and as low as $0.30 per pound for intrastate moves).  Reimbursement for a heavy dresser may only be $50 and a TV only $25.  So most people go with added fees for higher value options.

The next level covers the fair market value of your inventory (an inventory is the list of specific items being moved).  A bit like car insurance, the value assigned recognizes that you’ve already gotten several years of use and could be a bit less than what you might be able to sell it for.  If anything is damaged or lost the mover may repair it, pay for its repair, replace it, or give you a cash reimbursement.

You may also be offered full value protection which covers the actual cost you would have to pay to replace an item.  Fees for this option are usually around 1% of the covered value.

Keep in mind that even these options won’t fully cover anything valued at more than $100 per pound, and failing to identify those items could leave you out in the cold.

If you need higher levels of coverage, you can buy it from most insurance companies that offer homeowner’s policies.  These moving policies are typically supplemental, with coverage starting where the valuation option leaves off.  And they may have a substantial deductible.

Important Note:  Although some homeowners and rental properties cover your properties during a move, most do not.

Is It Worth the Added Cost?

In most cases, it’s well worth the additional costs of higher valuations for a worry-free move.  Although maybe not if you’re moving out of your first apartment.  But probably so if you’re moving nice furniture and the like.  In deciding you’ll also need to consider the details, especially if you’re considering third-party insurance.  For example, your property might be covered during transit in the truck, but not if it’s dropped between your home and the truck.

The particulars can get a bit complex and we’ve only summarized the key points here.  We’re always happy to discuss details and answer your questions.

Get A Free No Hassle Quote Now!